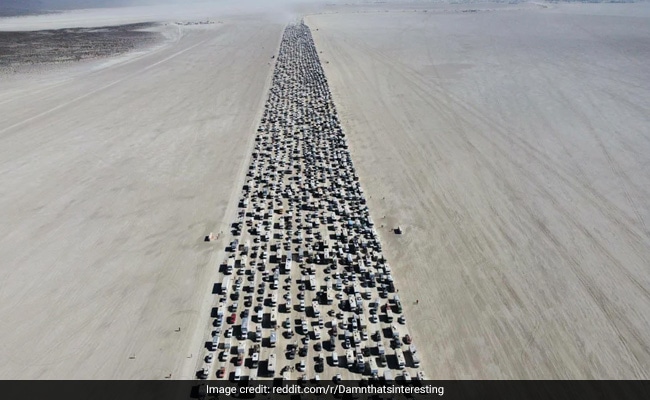 Long queues of vehicles are seen leaving the Nevada desert.

The end of the nine-day music and cultural festival in Nevada, in the United States, ends on Monday. But those leaving the scene in the Black Rock desert found themselves stuck in a traffic jam for eight hours as thousands of vehicles lined up at the same time, a report in New York Post said. This is the first Burning Man festival after three years of delay due to COVID. Images showing the post-debauchery traffic jam are now going viral online.

The current Exodus wait time is around 8 hours. Consider postponing your departure until conditions improve. If you have to leave now, drive on L Street to avoid traffic jams. Drive slowly, watch for road debris, follow directions from Gate staff, and listen to BMIR 94.5FM.

At least 80,000 attendees have reached the venue for the nine-day festival.

The photos were posted by these revelers and show 15 lanes of bumper-to-bumper traffic for miles.

“People like to compare the aesthetic of #Burningman to Mad Max….. Exodus from camp was the craziest Mad Max I’ve had all week…5 hours, two more until I reach the exit gate,” one user said on Twittercompared waiting times to “Mad Max”, a film about escaping from a dystopian desert setting.

Traffic during the “exodus”, as exiting the festival is known as “incendiary”, is expected but this year’s congestion seems brutal. The ongoing heat wave and gas crisis also added to the chaos.

For the Burning Man festival, held ahead of Labor Day, thousands of people travel from all over the world, dressed in whimsical outfits for another week of partying.

The festival concludes with the burning of the statue, called the Burning Man. This has been the traditional way of closing the festival since its inauguration in 1989.